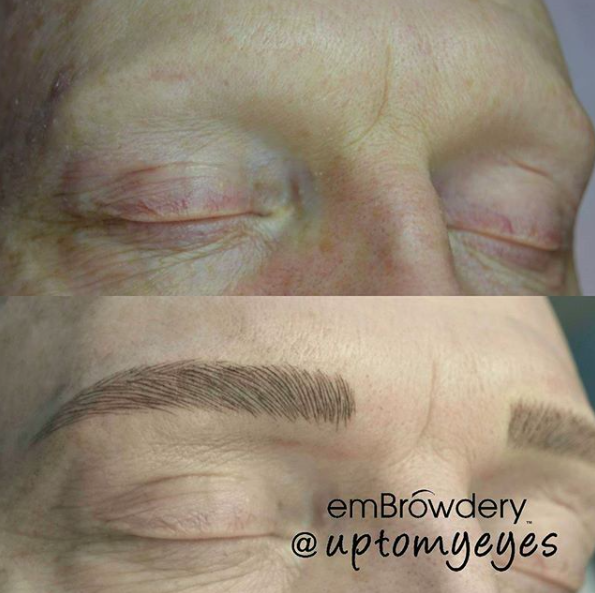 emBrowdery Q&A With Elaine McParland; Owner & Founder Of The Renowned Up To My Eyes Salon

You might remember a few weeks back I posted about my cousin’s first emBrowdery treatment at the renowned Up To My Eyes salon in the heart of Greystones, Co Wicklow. 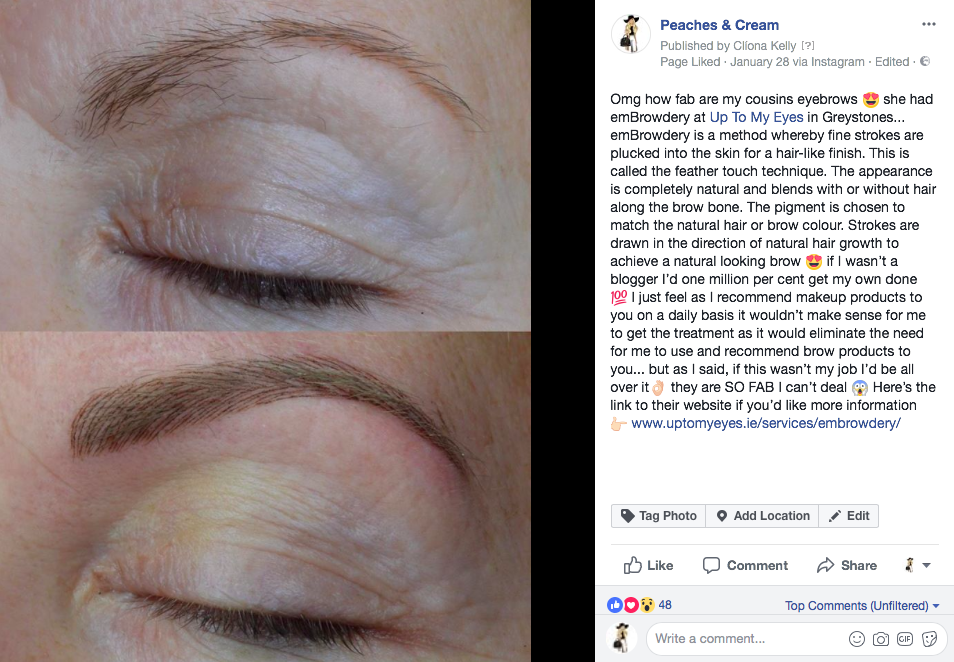 When I initially posted the picture there was a lot of confusion surrounding the treatment, namely from those wondering if it’s similar to micro blading –  a form of semi-permanent tattoo that involves using tiny needles that make up a small blade to help deposit pigment under the skin.

Because I’m not trained in the technique I felt slightly vulnerable when asked specifics about the treatment itself so instead I hooked up with Elaine McParland, owner and founder of Up To My Eyes, to get answers for all the questions you’ve been dying to ask!

The salon is famous for its eyelash extensions and was the first salon in Ireland to introduce emBrowdery. To give you a bit of background on Elaine, she learned the intricate art in Hong Kong and has since become a master in emBrowdery!

In addition, the salon has been nominated for countless Image Business of Beauty Awards including Best Brow Artist. I mean, you can’t get much better than that can you?

So to sum up what you guys want and need to know re emBrowdery, I narrowed it down to the following few questions:

1. What is emBrowdery?
2. How does it differ to other techniques such as microblading?
3. Is it painful?
4. Is there any downtime?
5. How long will it last?
6. How many sessions will I need?
7. What is the total cost incurred?

And this is what Elaine had to say: “emBrowdery is a form of semi-permanent makeup which creates realistic looking eyebrow hairs. The technique used is micro stippling as opposed to micro blading.

Micro blading is achieved by cutting tiny little hair strokes into the skin with needles that are held together in the shape of a blade, putting pigment into these hair like cuts and waiting for the skin to heal over them to trap the pigment. It is very effective and looks very well but there is some downtime as the skin has to heal and it usually involves scabbing.  It has been popular with our Asian counterparts for many years however, it is relatively new to Ireland and the jury is still out as to whether it will scar the skin over time.

This technique (micro blading) needs to be carried out every year to top up the brows. Irish skin is very different to Asian skin and it certainly isn’t as thick. I myself trained in microblading in Singapore in 2010.  I was the first in Ireland and England doing this technique and to be honest, I was very nervous about it. For a start, if I created a stroke that didn’t look too good, there was nothing I could do about it, the client had to wait a LONG time for it to fade out.

Also, the technique can lead to a lot of bleeding and the essential use of anaesthetic, as it is quiet painful. I wasn’t comfortable with the disadvantages so I stopped doing it after a few months. I decided that I wanted to do something that was much gentler, didn’t necessarily need anaesthetic, didn’t cause lots of bleeding and didn’t become semi-permanent until the client was sure that they were 100% happy with the formation of strokes and the shape that I designed for them.

I eventually came up with the technique of micro stippling and this technique is totally unique to us. Nowhere in the world will you find anybody using it for hair strokes.  The reasons are obvious, it is much more difficult to do than microblading, it takes much more time, 3 appointments are needed instead of only 2 with microblading and the profits are not as good. It involves plucking up the skin (we’ve been plucking our brows for centuries and no one has ever created scar tissue from it) creating a hair stroke with tiny little pin head sized perforations into the skin, leaving pigment on top of the tiny little holes we’ve created, and letting the body’s natural immune system carry the pigment down to the basal layer of skin.

Whilst it’s intricate and very time consuming,  the team at Up To My Eyes love it. This is because we know we are not causing possible scarring within the skin (if this happens, pigment will never be able to enter the skin again), not causing much pain and most importantly of all, if we do something the client does not like, we are not making them miserable for a year. We can all sleep better at night!

The disadvantages of emBrowdery is that the client can be disappointed when it virtually all but fades out after the 1st treatment but when we explain to them that the foundations are down and now we have to build the house, they understand. We think this kind of disappointment is much more preferable then having a brow that you don’t want and have to either get removed (which is painful) or wait up to 12 months to fade.

emBrowdery brows are perfect for men as no pain, no scabbibg or sloughing and best of all, they get to trial them out before we make them semi perfect. The perfect solution for male hair loss. #embrowdery #uptomyeyes #awardwinningsalon #greatbrows #malebrows

The type of clients that we attract to emBrowdery are usually quiet discerning. They have done their research and the method of how the pigment is applied is of importance to them. Also, because this technique is so gentle, we can do treatments on problematic skin, those on medications and older mature skin whereas these can be contraindications for microblading.

We also offer the Phi Brow treatment (which is microblading)  but on average, 90% of our clients opt for emBrowdery.  Both treatments last the same and will require an annual top up after 12 months.

emBrowdery has no down time as the skin hasn’t been cut. Both treatments also cost the same at €480. We ask for €70 deposit, €210 at the first appointment which is 2 hrs long, €120 a month later at the 2nd appointment, and €80 a month later again.

We have carried out emBrowdery on approx 10,000 clients to date and in the main, clients are very happy with the treatment. Both treatments are tricky to carry out on those with oily or exceptionally dry skin and they don’t always get a good result. We explain this to everybody at the consultation to keep their expectations realistic.”

I hope you found this post informative and if there’s ANYTHING else you’d like to know don’t even hesitate to ask! x